​JHF in the news

In a Santa Ana neighborhood, people living with schizophrenia find an oasis 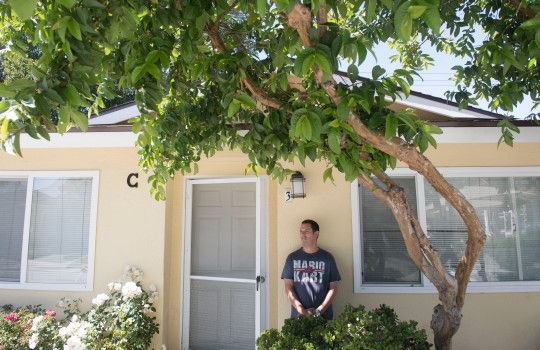 Resident John Tracey, 45, outside his building at the John Henry Foundation’s long-term residential care facility for adults with schizophrenia in Santa Ana on Wednesday, June 27, 2018. (Photo by Kevin Sullivan, Orange County Register/SCNG)
By THERESA WALKER | thwalker@scng.com | Orange County Register
For nearly 30 years, The John Henry Foundation has housed several dozen adults in a cluster of cottages on a quiet street in Santa Ana.

The residents at the neatly landscaped campus are all mentally ill, diagnosed with schizophrenia.

But a passerby wouldn’t know mental health patients lived there without entering the gate and paying a visit. The residential campus with its creamy yellow stucco buildings blends right in with the single family homes on the block.
The 35 people who occupy its cottages pose no trouble or danger to anyone.
The campus and its inhabitants defy the stereotypes that make it difficult for communities to accept housing for the mentally ill in their midst.

The residents take their medications, one of the requirements of John Henry Foundation. They come and go to school, work, volunteer jobs, organized outings and other personal activities — just like people without mental health issues do in their normal lives. If someone has a moment of crisis, there is medical staff on hand to help them deal with it.

Laura, a longtime resident who did not disclose her last name, loves the peaceful atmosphere that is enhanced by the flora and fauna — butterfly bushes, bottle brush and lime trees, and jacaranda whose falling blossoms she likes to call “purple rain.”
She said was glad for the low-key ribbon cutting to celebrate the expansion, “‘Cause this is our home.”

Outside the campus, the residents are familiar sights in the largely Spanish-speaking neighborhood, whether catching the bus or strolling to a nearby store or the food truck on the corner where kids buy ice cream, candy and other snacks.

So when John Henry Foundation sought approval from the city to expand to seven residential buildings in order to house up to 42 people, the neighbors didn’t object. In fact, the president of the Santa Anita Neighborhood Association wrote a letter in support.

The renovation completed last month included two new cottages, along with new roofs, paint, flooring, and fixtures for the existing buildings, and landscaping. The campus, once called Moore Village, also has a new kitchen where a chef serves nutritionally balanced meals, a recreation room and small gym, and two laundry rooms.

Some of the residents have lived there less than a year; others for more than a decade. There’s been a waiting list for years; the newest inhabitant moved in Monday, stabilized after a stay in a psychiatric hospital. More are expected to arrive in the coming weeks, including two people who have been living temporarily in hotels.

The campus offers a chance for people dealing with schizophrenia — whose symptoms can range from delusions and hallucinations to withdrawal and extreme apathy — to not only find stability but re-integrate into society. The calm atmosphere is essential to their well being.

John Tracey, a resident for five years now, said coming to the Santa Ana campus changed his outlook on life. Originally from Seattle, Tracey, 45, has stayed in board and care homes where he experienced emotional abuse or where drug abuse was rampant.

“Once I got here, I just had a little bit more hope than I did before,” said Tracey, who started taking classes through Saddleback College two years ago and is working on a certificate so he can do peer support and care management for others with mental illness.
Tracey said he likes being able to walk out his door and socialize with other people like himself. But he hopes to move into his own place next year.

Were he still in Seattle, Tracey said, he’d likely be hanging out with a bunch of alcoholics, “with no meaning in my life.”

The John Henry residential model is one that Danny Gibbs, a board member with the Orange County affiliate of the National Alliance on Mental Illness, wishes was an option for more people. But the cost is prohibitive: Residents at John Henry privately pay about $3,500 monthly to live there.  Their families bear most of the cost, with some funding from medical insurance.

Then there’s the challenge of overcoming NIMBYism, Gibbs said.

“There’s definitely a stigma that nobody wants people with mental illness to come near them,” said Gibbs, 37, who has dealt with mental health issues since his early teens. He’s been employed by the county as a mental health peer specialist the past 11 years. Group homes and board-and-care homes are a mixed bag, he said, while a lack of financial and structural support often prohibits staying with relatives.

Gibbs, who got his bearings at the famed but now-closed Menninger Clinic residential recovery center in Kansas, feels places like the John Henry campus — which offer treatment, housing, and socialization  — do a better job at trying to “re-insert you back in the community.” Or, if needed, provide long-term care tailored to the individual.
There just aren’t enough of them.

Few exist in California. The John Henry campus, limited to people diagnosed with schizophrenia, is the only one of its kind in Orange County.
Executive director Mindy Andrews forged a partnership with the UCI School of Medicine in 2011 that includes year-long residencies for recent doctors of psychiatry graduates and working with Dr. Rimal Bera, UCI professor of psychiatry, as the foundation’s medical director. Bera visits the campus weekly. Clinical director Dr. Andrew Kami is there full time.
Resident Joe Csapo learned about John Henry Foundation through Kami while recovering from a mental break at a psychiatric hospital in Pasadena about five years ago.
Csapo, 37, had lived most of his life at home with his father in Alhambra. He likes the combination of support and independence at the campus. He got into working out — to lose the belly he had developed — and now goes to a gym in the community several times a week, taking other residents along for fitness sessions. His father also joins him at the gym.
Muscular and soft-spoken, Csapo would like to become a personal trainer: “I’d like to have my own place, but at the same time, I like it here.”

Families of the residents are glad the campus has continued operating.
Mary Ellen Stuart attended the June celebration to mark the completion of the new buildings even though her brother Jim Conway died last year at 51 from cancer. And she continues to come to the monthly family meetings and to visit residents.

“It’s so necessary,” she said of the kind of housing and program offered at the campus. “I wish we could take the whole block and give this resource to others who need support.”
Conway, diagnosed in his early 20s, functioned well enough in his native Michigan to run a landscaping business and buy a condo, Stuart said. But his mental state deteriorated with the death of their father in 2001. He arrived at the Santa Ana campus in 2008 after a bad experience at a board and care facility in Los Angeles. He thrived with John Henry, becoming a mentor to other residents.

Stuart, who lives in Newport Beach, said she’ll never forget the dedication of the staff as her brother succumbed to esophageal cancer, care that included every one of them learning how to feed him through a tube.

John Henry is the only facility of its kind in Orange County, providing long- term housing, psychiatric and psychological care, job training and socialization tailored specifically for adults with schizophrenia and their families.

Many Orange County residents with mental illness languish in jails or hospitals or lead homeless lives on the streets at great cost to the   community.

And every week brings news of some tragic incident involving individuals suffering with schizophrenia.

A fortunate few men and women with this devastating illness have found hope, and are leading meaningful lives at John Henry Foundation’s privately operated residential program in Santa Ana.

The UCI School of Medicine and John Henry Foundation are in their fifth year of an affiliation providing a unique opportunity for hands-on training of medical residents in psychiatry.

The program enables doctors from UCI’s Department of Psychiatry and Human Behavior to work, during their final year of residency, at the foundation’s home for adults with schizophrenia.

This unique arrangement provides medical residents with an opportunity to work with patients and their families in a more intimate and long-term relationship than is possible during normal office visits. They also conduct group therapy, which reaches out to multiple patients at a time. As medical director of the John Henry Foundation, I supervise their training, as well as the psychiatric care of John Henry’s clients.

Several colleges send graduate students majoring in psychology and counseling to learn best practices in their field as interns at the foundation.

The foundation also has a cooperative effort with Goodwill Industries in which mentally ill residents receive job training, helping them to rebuild life
While much attention was focused on the tragic death of schizophrenia sufferer Kelly Thomas at the hands of police officers in Fullerton, Dr. Andrew Kami, JHF’s clinical director, conducted training for the entire Santa Ana Police Department on techniques for dealing with mental illness on the streets.

Kami relates that, “within the law enforcement community, the behavior by those who are delusional is often one of the more difficult things to understand.”

JHF Chief Executive Officer Mindy Andrews is a leader with significant non-profit agency experience.   She is proud   that the foundation receives only about 10 percent of its funding from government agencies and the remainder from private sources including philanthropies and donations from friends and families. “We could use more public funding, but being private also leaves us freer to set innovative goals with our residents for their own recoveries.” she says.

All of the foundation’s approximately 30 beds, in its six bungalows, generally are filled with long-term residents. They are free to leave, but elect to make John Henry their home.

There is an acute shortage of facilities for the mentally ill and the foundation has a waiting list for entrance into its program.

The foundation has acquired another half-acre of land adjacent to its current campus in Santa Ana. The staff is looking forward to modifying the two houses on that site to accommodate another twelve JHF residents. Members of the foundation’s board of trustees and advisory board of local civic and business leaders are working with the city on plans for the much needed expansion.

Dr. Rimal Bera is a clinical professor of psychiatry at UC Irvine and medical director at John Henry Foundation, a center for the treatment of schizophrenia. He was recently selected the 2014 OCMA Physician of the Year by the Orange County Medical Association.